How I Treat Tennis Elbow 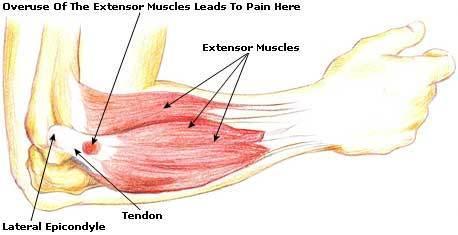 Tennis elbow is clinically called lateral epicondylitis. It presents as pain over the outer or lateral portion of the elbow. The pain can be sharp in character and almost always occurs when someone reaches out to grab something such as a carton of milk. Patients will have weakness in grip strength. In orthopedics it is easily one of the most common diagnosis that we see in our practice.

The cause of tennis elbow is from repetitive motion, such as hammering which cause the tendons on the lateral part of the elbow to become injured. It is what we call an overuse type of injury. We often see it after someone has been working at home or in the yard over a weekend . This then aggravates the tendon. By Monday the elbow is painful and the patient will often grimace when trying to shake their hand.

The majority of patients can be treated conservatively. First the activity that causes the pain must be limited. If it occurs during tennis then changing the grip or using a two handed backhand may relieve the problem.

I usually start patients on an oral anti-inflammatory medication (NSAID) and have them do specific stretching exercises for tennis elbow. This may include going for formal physical therapy. Many patients have already been on an NSAID when they come to the office. I often try a cortisone injection right over the area. This should not be repeated more than twice.

A tennis elbow brace is used and I like to fit the patient in the office to make sure that it is in the correct position. The brace is worn during the day and while it may not completely get rid of the pain it can reduce symptoms.

For those patients who go through at least a 6 month course of conservative treatment including physical therapy, NSAIDS and injections and don’t get better then surgical treatment may be indicated. At this point an MRI would be orderedto get as much information about the condition of the bone, ligaments and tendons in the elbow.

Surgical treatment includes injection of platelet rich plasma (PRP) or an open surgical procedure. Some physicians will use PRP in the office, but I personally prefer to inject it in the operating room since it is painful. Studies done at Stanford University have shown a 75% success with PRP for treating tennis elbow. Afterwards patients can start elbow stretching exercises.

The other option is an open procedure where the diseased tendon is excised and often the bone in that area is smoothed down. Following surgery I usually put the patient in a splint for one week and then send them for physical therapy. Recovery can take up to two months postop. Patients can usually return to sports after four to six months.

Office Hours
Get in touch