Anterior cruciate ligament (ACL) injuries are one of the most commonly associated major sports injuries in our society today, but they can happen in many other low-velocity, non-contact situations as well.

Anatomy: The knee is made up of three major bones coming together, the femur, the tibia, and the patella. The anterior cruciate ligament is the main tissue holding the femur and tibia together. The knee is essentially a hinged joint that is held together by the medial collateral (MCL), lateral collateral (LCL), anterior cruciate (ACL) and posterior cruciate (PCL) ligaments. The ACL runs diagonally in the middle of the knee connecting the femur and tibia together. It also prevents the tibia from sliding out in front of the femur, and provides rotational stability to the knee.

The ACL being one of the most commonly injured ligaments in the knee. Over 200,000 ACL injuries are reported annually, with roughly half of those requiring reconstructive surgery. The people who are at highest risk for ACL injuries are those who participate in high-risk, high contact, or high speed sports like basketball, football, skiing, or soccer.

Often times an ACL injury happens in combination with an injury to other knee ligaments, the meniscus, or articular cartilage which is why a magnetic resonance image (MRI) scan is often necessary when determining the extent of a knee injury.

ACL injuries are often caused by rapid deceleration while cutting, pivoting, or changing direction. Awkward landings or behavior that could be considered “out of control” can also cause ACL injuries. Once someone experience an ACL injury they typically notice swelling and feel that the knee is unstable. Over the following hours the swelling can continue, they may experience a loss of full range of motion, along with pain and tenderness around the knee. Walking can also be very uncomfortable.

Treatment - Nonsurgical: The primary nonsurgical treatments are different physical therapy sessions. The outcomes of these treatments is that the knee can become almost as strong as it was prior to the injury. Many times this treatments are assisted with a knee brace to provide additional support. The disadvantage of these treatments is that the end result is more prone to a follow up injury because the ligament is still weaker than it had been prior to the injury.

Surgical: ACL reconstruction surgery is not executed in the way that you might think. Instead of sewing the damaged ligament back together, the ligament is replaced by a substitute grafted tendon. This is called an autograft, where the surgeon takes part of a tendon from a separate part of the patient’s body. The most common grafts used to replace an ACL include the patellar tendon, hamstring tendon, or quadriceps tendon. The surgeon might also perform an allograft which is simply grafting from a cadaver.

Patients who choose to undergo surgery typically have a higher long-term success rate because the reconstruction of the ACL has created a much more stable joint than if nonsurgical treatment is pursued.

Things to Consider: If you are an adult who would consider yourself to be an active person, playing sports or high speed activities, and you have suffered an ACL tear then your best bet is most likely to consider surgical treatment. Children should consider waiting until they have reached skeletal maturity because ACL reconstruction can create possible risks of growth plate injury, which can lead to more problems down the road.

This is a unique case where we were able to look back at an ACL reconstruction that I did 5 years ago on a 40 year old male patient. The patient had a cadaver graft placed initially for a torn ACL. You can see that the graft looks pristine, but there are no blood vessels present. The graft was from a tendon in the ankle. It can take at least a year for the tendon to transform into a ligament and develop its own vascularity. This is seen in the second photo. The patient had the recent surgery for a torn meniscus and the 5 year old ACL looked just like a normal ACL. 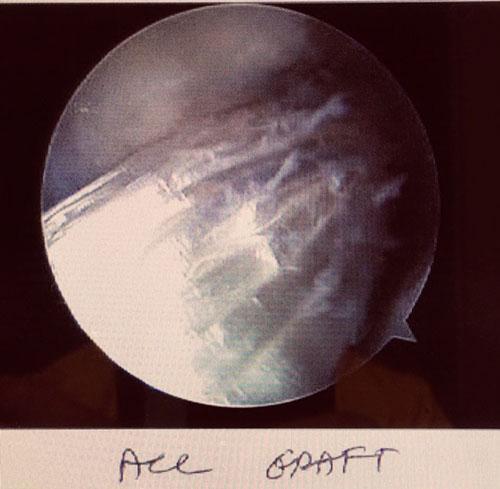 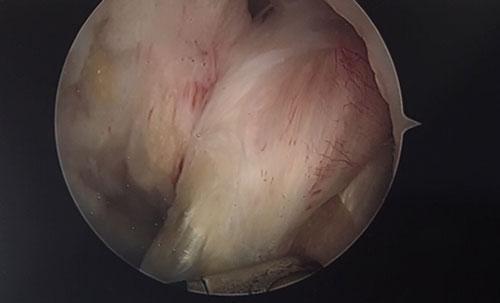